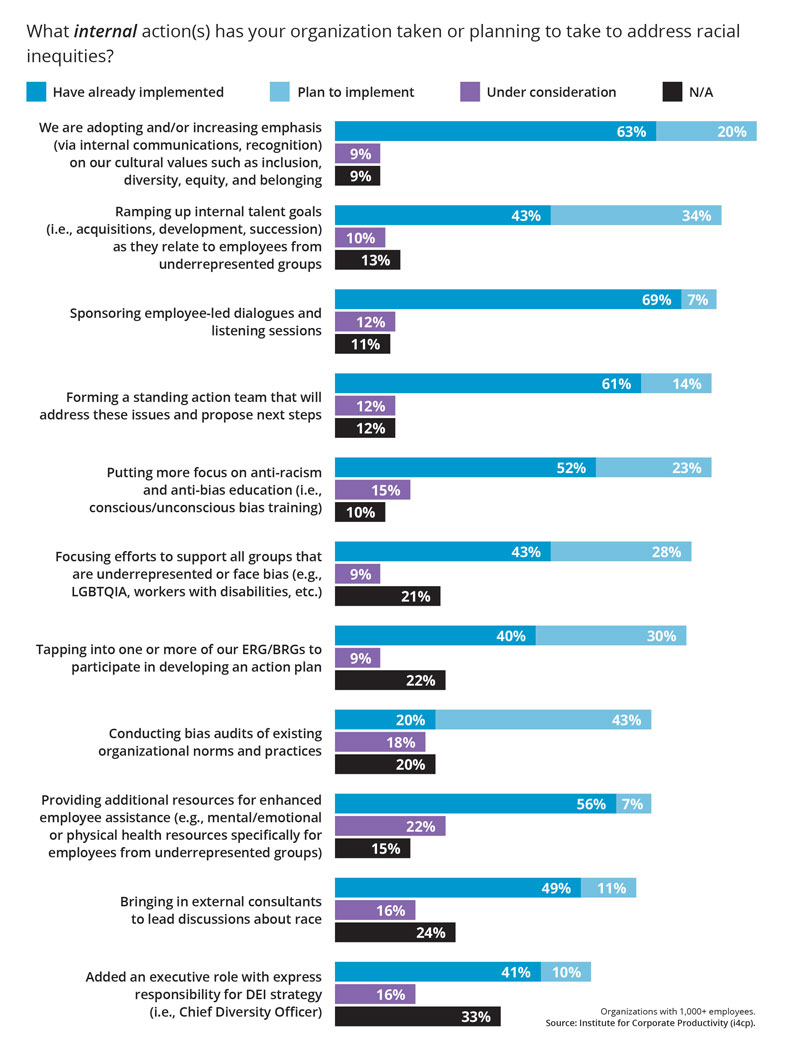 The turmoil that
sparked last summer’s social justice and racial equity demonstrations shook
political and social foundations. It also compelled corporate leaders to make
unprecedented promises to address systemic inequities in the workplace and
beyond—a survey fielded last June by the Institute for Corporate Productivity (i4cp)
showed that approximately 90% of the 216 organizations polled planned to act on
racial inequities in the wake of the murder of George Floyd and all that
transpired in the summer of 2020.

In
recognition of Black
History Month, i4cp revisited how well those promises are being kept by surveying
on the status of the actions so many organizations pledged eight months ago to
pursue. The current survey also asks who is tasked in the 169 responding organizations
with driving diversity, equity, and inclusion (DEI) goals and accountability.

The good news
is that the energy following Black Lives Matter marches in the U.S. for George
Floyd, Ahmaud Arbery, Breonna Taylor, Rayshard Brooks, and others seems to have
transcended the moment and continued as a movement. Many organizations show steady
focus and commitment to DEI-related actions, including a sizable percentage
(41%) that added an executive role with express responsibility for DEI
strategy (i.e., Chief Diversity Officers)—with another 10% planning to do
so soon.

The bad news
is that while organizations are still prioritizing equity pledges and working
towards systemic change, some high-impact actions have taken a backseat to
other priorities, such as the continued challenges caused by the COVID-19 pandemic.

Overall,
organizations are doing well with implementing the internal actions promised
during the eight-month interlude between the two i4cp surveys. The percentages
of those emphasizing DEI as cultural values, sponsoring employee-led
listening sessions and dialogues, forming standing DEI action teams, providing
additional EAP resource for underrepresented groups, and bringing in
external consultants to lead discussions about race are in line with or
surpassing what was reported in June 2020.

Other actions
that the previous survey didn’t ask about—such as the aforementioned addition
of a CDO and the ramping up of internal talent goals for underrepresented
groups—are also encouraging signs that momentum on racial equity efforts will
continue. This goes hand-in-hand with the strengthening of accountability for
DEI, such as the recently announced goal at McDonald’s of 35% diversity at senior management levels by 2025
that’s tied to 15% of
executive pay bonuses.

Some actions,
however, are still largely in the planning stage. For example, while 43% of
those polled this month say their organizations have already increased their
previous talent goals related to representation (i.e., acquisitions,
development, succession), for 34% this is a work in progress. Other initiatives
that appear to be moving more slowly are spreading the focus of inclusion
and equity pledges to all underrepresented groups and tapping into
ERGs/BRGs to develop action plans.

One striking
example of this is the number of organizations conducting bias audits of
existing organizational norms and practice, an action that i4cp research
has continuously shown to be highly impactful on addressing systemic inequities
and is also considered a next practice (a practice with strong
correlations to market performance, but which is not highly adopted yet). While
this action has only been undertaken by 20% of organizations surveyed, 43% are
planning to do so in the near term. For more on how to conduct a bias audit,
see i4cp’s member-only bias
audit checklists.

From adopting
or increasing emphasis on DEI values to auditing political donations and
lobbying activities, what’s been implemented externally already surpasses
what was reportedly in the works last June. That said, all actions below are
still under the 50% mark for what’s actual been accomplished, with many reporting
that their organizations are still in the planning stage.

Notably, ensuring
equal access to business offerings or services to underrepresented communities—a
big driver of economic equity—has been implemented by 40%, with another 21%
planning to soon.

Likewise, the
current survey found that approximately 20% of respondents said that their
organizations are still working on implementation of starting or increasing
funding for supplier diversity and requiring partners to share their
supplier diversity data. So, while all of the actions queried on are
important to moving the needle on systemic racial issues, the three that have
arguably the most impact are also the ones with the most work left to be
done.

As for who is
doing the work, talent acquisition (TA) is the function most heavily tasked
with increasing diverse representation and advancing equity and inclusion
goals, followed closely by the office of DEI (75% and 71% respectively). TA was
also the top write-in when respondents were asked about individuals or groups
with DEI performance goals and accountability. The group most cited was HR
(57%), followed by the senior leadership team (45%), and the CEO (41%). 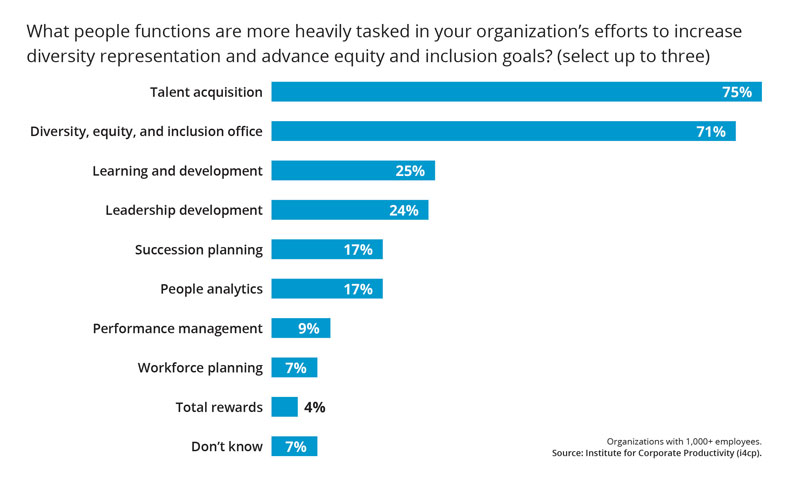 While greater
proliferation of goals and accountability are a positive sign of organizational
commitment to DEI, this raises concern that many believe they can solve their
diversity issues by hiring alone or that DEI is the work of one group or
individual to the exclusion of others.

i4cp’s 2021 Priorities and Predictions
report placed DEI as a solid focus for the year to come, driven by the
turbulence of 2020, stakeholder demands, and rulings on human capital data
disclosures. These factors will continue to put pressure on organizations to
stay the course, and will hopefully lead more to fulfill the promise of more
diverse, inclusive, and equitable workplaces for all.

How Your Thoughts Are Connected To Your Future | Dr. Joe Dispenza Motivation
How Being In Quarantine Can Change The World | Goalcast /McRaven “Make Your Bed” Speech