This Sunday is Easter. Regardless of your religious preferences,
Easter is usually associated with family gatherings, egg hunts and parades…traditions
that are universally erased this year. For
many American companies and workers, Easter this year also represents a line in
the sand that was erased almost as quickly as it was created.

On March 24, Donald Trump said he wanted the U.S. economy
“opened up and just raring to go by Easter,” a statement he backed away
from a few days later. And for good
reason. A survey we conducted
immediately afterward showed most companies felt that timeframe would have been
reckless and put employees lives at risk.

While Easter proved “not safe for work,” the question no one
can answer is, if not now, then when?

As Aaron Carroll, a professor at Indiana University School
of Medicine pointed out in the NY
Times this week, that is probably the wrong question. The better question is: “How will we know
when to reopen the country?” He went
on to outline criteria on hospital, healthcare professional and testing
availability, case monitoring, and a sustained reduction in confirmed cases as
indicators that it will be time to reopen the economy and make it safe for work
again.

But “safe” is a relative term. While it is primarily being used to refer to the
physical safety of employees, it’s the psychological safety of the workforce—and
the practicality of returning—that will end up being the main determiners. When we asked companies about that Easter return
date, we also asked them to project how their employees would feel about
returning. While 34% said they’d
probably do so reluctantly, almost 50% said it depends on the reopening of
schools, childcare, and eldercare along with their own perception of when the
risk of being around their co-workers has passed.  Easter will be a distant memory by the time
these factors really come into play.

Today, though, companies are starting to think about plans
for a return. In an April 8th survey, we
found that 67% of companies felt strongly that their facilities were ready to
go, but with a few new expectations.
More than half said they would require employees to sanitize work space
they had just used, and a significant number of companies said they would limit
the number of people allowed in the same workspace at the same time and
reconfigure workspaces to ensure greater physical distance. They would also decrease or eliminate shared workspace
and even look to decrease their real estate holdings in the future. 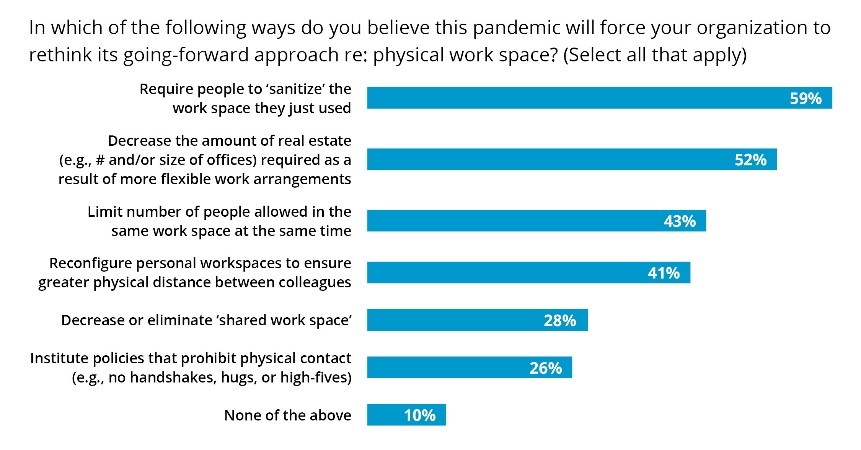 Downsizing corporate real estate seems an
inevitable outcome from this pandemic. We
found that 54% of organizations expect to expand their flexible work
arrangements as attitudes toward remote work have changed. Further evidence: 72% of companies expect to eliminate, or at
least drastically reduce, in-person meeting requirements, and 41% say that
proximity will no longer be a requirement in hiring decisions.

However, it’s the emotional and mental state of the
workforce that companies seem least sure of.
Less than one quarter of companies felt confident that the workforce is
ready to come back, although over 47% feel that senior leadership needs to
place as much emphasis on culture health as it places on financial health. The attention to employee psyche is expected
to become more commonplace, as almost 40% recognize they will need to step up
elements of their well-being programs such as meditation time, workouts,
walking meetings, etc., and allow those to become an expected part of the
workday.

Mark Cuban, owner of the Dallas Mavericks, acknowledged this
issue when
asked by Axios about the return to work.
“No one wants to talk about this, but can you even get workers back who
aren’t so addicted or depressed they can actually function?” 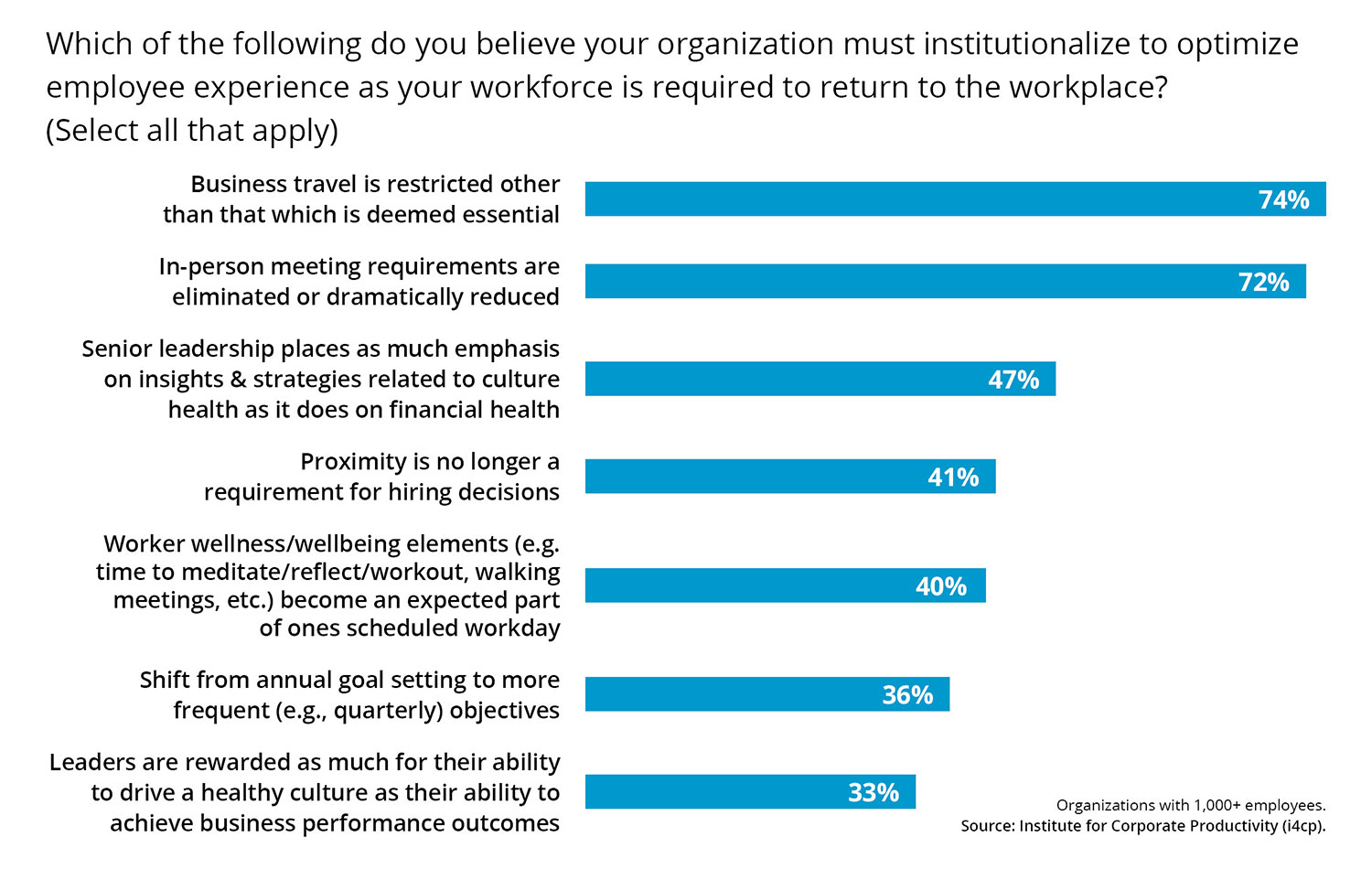 For many, it’s too soon to even think about a return to the
workplace as virus outbreaks have yet to peak in many geographic areas. But eventually we will, and—for the holistic
well-being of employees—organizations need to think through how they will
support what is sure to be an emotional and psychologically challenging time
period for many.

Here’s hoping for a smooth transition and future Easters
that will once again be associated with family gatherings, egg hunts, and
parades.