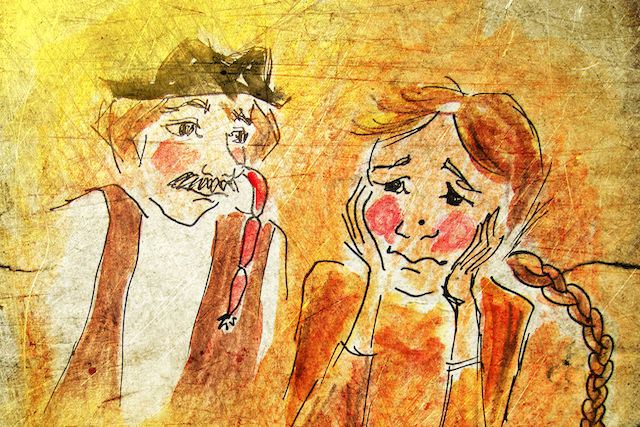 “Love is the ability and willingness to allow those that you care for to be what they choose for themselves without any insistence that they satisfy you.” ~Wayne Dyer

When I married my ex, he had the potential to be a fantastic husband.

If I’m to be honest with you, that’s why I married him—I thought he could eventually be everything I wanted in a partner. I’m not proud of it.

To be fair, he had a lot going for him. He was handsome and creative. He was generous and romantic. My ex was a true gentleman. He dressed well and he was more grown-up than any man I’d dated before.

He knew how to adult, and I found that wildly attractive.

Still, there was an edge to him that didn’t feel quite right—at least, not to me. His sweeping gestures felt inauthentic more often than not, but try telling your friends you want to break up with a guy because he left a mixed tape sitting on the windshield of your car, or because he wrote you a love poem, or because he insisted on giving up his seat to one of your (male) friends.

“You’re just not used to being loved,” they’d tell me, and so I second-guessed myself and focused, instead, on letting the love in.

Just two or so months into our relationship, he asked a business acquaintance of mine how much money he earned a year.

I just about died.

Had he blurted this question out in a moment of thoughtlessness, I wouldn’t have made a meal out of it, but that wasn’t the case. He asked this question because he felt it was a perfectly reasonable question to ask.

Right there and then I thought, nope, this isn’t going to work. My boundaries are here. His are way over there. We are not compatible. I told him as much, but he had one mission and one mission only: to love me.

“Don’t worry,” he assured me. “I’d have no problem if someone asked me what my salary was, but I get that it makes you uncomfortable, so I won’t ask questions like that anymore.”

For ten years, I challenged my ex to be the husband I wanted him to be.

One capable of following basic social protocols. One that was quick-witted and fast on the uptake. I wanted him to take greater interest in our long-term financial well-being, to release people from his hugs when they seemed uncomfortable, to make his public displays of affection less public. The list went on.

One day he proclaimed that he didn’t feel like himself when he was in my company.

“How long have you felt this way?” I asked.

“For about ten years,” he answered. About one year less than the entire duration of our relationship.

“When did you figure this out?” I asked. “Last week,” he explained. He’d been standing in the park opposite our suburban house, chatting with a bunch of suburban women and feeling totally at ease with himself—until I came along.

The moment I joined the crowd, he said, he began to feel uncomfortable. Like he could no longer just be himself. I felt sick, yet I understood.

How could he possibly have felt at ease in my company when I was constantly wishing he were someone else? Obviously, he couldn’t. While I took ownership of my role in this situation, I still felt buckets of rage over his.

Why, oh why, hadn’t he told me where to shove my expectations?

We were both to blame.

Shortly after this conversation, I located a phone bill that had mysteriously gone missing. This bill put the final nail in our coffin. From it, I learned that my ex had been making daily (sometimes twice-daily) phone calls to another woman, my daughter’s caretaker.

If you think this is about to take a sordid twist, I’ll tell you right now, this isn’t one of those husband-leaves-wife-for-hot-young-nanny stories.

She, the caregiver, was a married, church-going mother of three who was just a few years my junior. While a physical attraction was likely one of the things that drew him to her, I’m guessing the bigger attraction was the freedom she gave him to be himself.

If only I understood then what I understand now. You can’t base a marriage on potential.

In hindsight, he and I didn’t stand a chance. Still, I have no regrets. Not only was my daughter born from this relationship, but I am wiser for the experience. I learned that we can’t change people who don’t want to change, and if we enter into any relationship with that expectation it’s certain to end badly.

Is it wrong to want more from the ones we love?

There’s nothing wrong with hoping that a relationship may, like a good wine, improve with age. Before making a life-long commitment, though, shouldn’t we, at the very least, believe that what we’re entering into will be enough to sustain us? That the person we are committing ourselves to is enough?

If we can begin with a solid foundation of respect and acceptance, anything more becomes the icing on the cake. A nice-to-have but not a deal breaker if expectations aren’t met.

That’s where I went wrong.

I wasn’t in it for the cake. I was in it purely for the icing.

Viv is a freelance writer, blogger, and life coach who strives to understand her own motives, actions, and responses with a view to living her most authentic life. In 2017, she launched vivfortoday.com where she blogs her heart out. Through her blog and her coaching business, she helps inspire others to live with peace, joy, and positivity. For more from Viv, subscribe to her newsletter or follow her on Instagram.