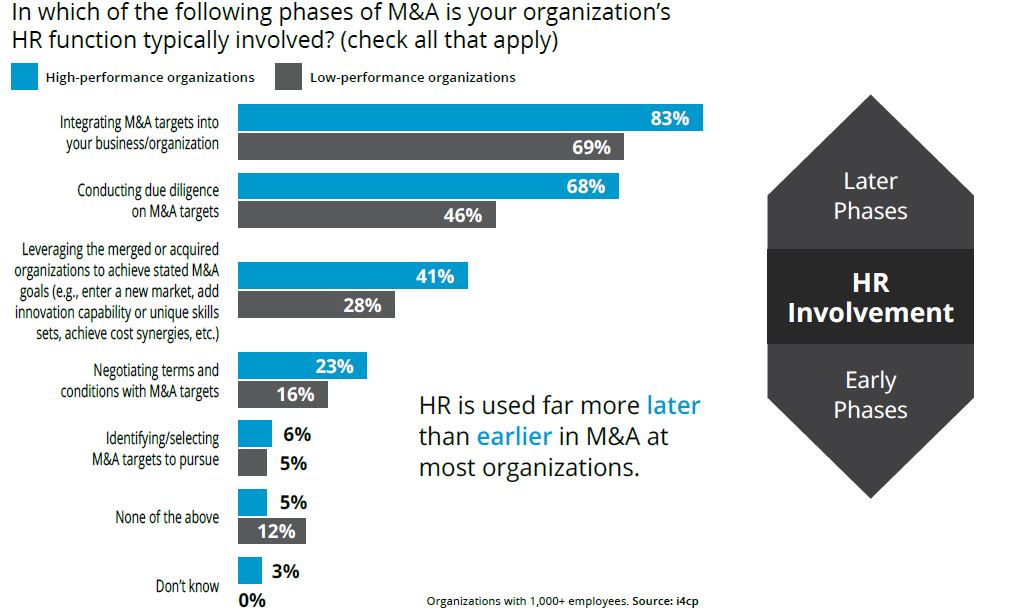 The following is largely excerpted from i4cp’s study,
Avoid Acquisition Acrimony: How to Analyze Culture Synergy Early (available to
i4cp members only).

Salesforce-Tableau, Google-Fitbit, Raytheon-United
Technologies, Bristol Myers Squibb-Celgene…2019 certainly saw its fair share of
M&A activity. While these and the
hundreds of other combinations in the last year are undoubtedly optimistic
about their future together, historically most acquisitions are deemed
failures. The reality of combining 2 or
more large companies brings about a variety of complexities which are often
overlooked or minimized in the euphoria of the deal.

In the past, AOL and Time Warner, Sprint and Nextel, Sears
and Kmart, & Daimler-Benz and Chrysler also all embarked on their
combinations anticipating success. While you can point to a variety of issues
that prevented these deals from working, culture clash was a primary element in
each one.

Let’s examine Sprint’s purchase of Nextel a little more
closely, since many point to it as one of the biggest failures in corporate
history. Looking back on this deal offers a vivid illustration of how
incompatible cultures—and the failure to reconcile them—can send an acquisition
up in smoke.

When the acquisition was consummated in 2005, both Sprint
and Nextel had similar market capitalizations of around $30 billion. Because of
this, the acquisition was initially championed as a “merger of
equals” but definitely not treated as such. Sprint’s dominant brand and
processes was the clear winner.

And while there were significant technology mismatches and
clashing marketing strategies, at the heart of the issue was that the two
organizations never integrated their cultures. In fact, both companies retained
their respective headquarters, with Sprint in Overland Park, Kansas, and Nextel
in Reston, Virginia.

There were other culture missteps: Nextel was renowned for a
commitment to delighting its customers. Sprint had a reputation for subpar
customer service. Nextel was known as an agile, fast-moving disruptor with an
entrepreneurial spirit. Sprint? More traditional, more hierarchical, more
rigid.

According to reports, Nextel employees often required
approval from Sprint leadership to address culture and other integration
concerns, which allegedly created friction and frequently led to no corrective
measures being taken at all.

Not surprisingly, the exodus of Nextel executives and
mid-level managers began just months after the deal was completed. A multitude
of business struggles followed in the forms of layoffs, measures to slash
costs, and, ultimately, a $30+ billion write-off a mere three years after the
acquisition.

Some refer to it as one of the worst acquisitions in U.S.
corporate history (Holson, 2008).

P&G and Gillette: Getting the best of both

Conversely, when Procter & Gamble announced in January
2005 that it would buy Gillette Co. for $57 billion, Gillette investor Warren
Buffett called it a “dream deal,” one that would create “the greatest consumer
products company in the world.”

Buffett was right. In hindsight, the acquisition (executives
at the companies preferred to call it a merger even though P&G was much
larger, and clearly acquired Gillette) has plainly been a success, but not
without its ups and downs in the years that followed.

Part of the reason for the success of the acquisition—which
P&G declared at the outset would form the world’s largest consumer-products
company by adding Duracell batteries, Right Guard deodorant, and Gillette
razors to P&G’s more than 300 consumer brands—was because the companies’
markets were highly complementary. Gillette’s core customer segment was men,
while P&G was known for marketing primarily to women. While Gillette was
strong in emerging markets such as India and Brazil (where P&G was often
outperformed by Unilever), P&G was strong in China. The companies also had
very similar organizational structures.

But another big reason was the focus on culture. A.G.
Lafley, P&G’s chairman, president, and CEO at the time (Lafley retired in
2015), described how important culture was in his early acquisition discussions
with Gillette’s CEO, Jim Kilt, who called him to propose a deal.

“I [then] asked how well he thought the cultures were going
to fit together. I said to him, ‘The P&G culture is more collaborative,
open, and competitive than you may know it to be,’ culture was a big issue in
deciding to do the deal” (Levine, 2005).

To make the deal work, the two companies adopted a simple
cultural and process strategy from the beginning: Let’s get the best of both.

Initially, the companies formed nearly a hundred global
integration teams, matching executives from the same functions in each company.
They also publicized intranet postings with tips from employees who had joined
P&G from previously acquired companies. And P&G respected the acquired
culture; Gillette employees could use their own processes until they learned
P&G’s way of doing business.

Building internal networks was a major emphasis to make Gillette
people feel welcome, but also to get business done. P&G was largely a
consensus-driven culture, so it was important to understand whose buy-in was
needed for decisions. P&G paired seasoned and new employees to facilitate
internal coaching and funded training programs on how to build networks and
relationships.

Despite the focus on and initial success of their cultural
integration, P&G and Gillette proved that merging two large organizations
is never easy. Two years after the acquisition, the Wall Street Journal ran a
front-page story describing the cultural challenges between the two companies.

Gillette and P&G resolved many of those cultural
differences, but not without a significant investment of time and money. In
2009 a $50 million renovation of Gillette’s “World Shaving Headquarters” in
South Boston was completed, moving senior Gillette executives into a new,
open-layout campus with ample common space and conferencing facilities to adopt
more of a face-to-face culture.

They also established a special task force to specifically
ensure that the two cultures were tightly integrated (Fisman, 2013). More
recently, market conditions have presented challenges. In July 2019, P&G
announced that it had taken an $8 billion write-down on the Gillette brand for
the fiscal fourth quarter of 2019.

P&G executives attributed the loss to a few key drivers:
in addition to currency devaluations, P&G cited factors such as the market
contraction of blades and razors—especially in the U.S., where the cool
quotient of the beard has skyrocketed in recent years—as well as increased
competition from online disruptors such as Harry’s and Dollar Shave Club, for
example.

For the most part, however, investors have shrugged off the
one-time charge, pointing to P&G’s earnings surpassing expectations—after
accounting for the impact of the write-down—and the company’s optimistic
forecast as reasons to remain confident in P&G.

Overall, it worked. While P&G and Gillette had many
variables to tackle, attention to culture and communication clearly helped make
the merger successful.

Early focus on cultural synergies should be a top priority

As both these examples show, cultural synergy plays a
pivotal part in whether an acquisition succeeds or fails. Much of this success
or failure stems from how much emphasis an organization places on cultural
synergies early in the courtship.

And this presents a tremendous opportunity for HR to step up
its game and demonstrate strong value.

Yet, while high-performance organizations are more than 2x
more likely than lower performers (71% vs. 33%) to indicate they involve HR in
identifying cultural similarities and differences in M&A targets, in almost
all instances (95%) they involve HR too late in the game.

Why does cultural assessment fall by the wayside even though
there’s clear acknowledgement of its importance? There are several reasons.

Most acquisitions are initiated by investment bankers and
brokers who earn most of their money via a percentage of the transaction.
Whether the acquisition ultimately succeeds or fails doesn’t impact this fee,
which is part of the reason the deeper aspects of culture often go unexplored.

When an acquisition occurs, some type of change in culture
inevitably follows. In i4cp’s Culture Renovation™ study, the data found that a
recent merger or acquisition was the primary driver for almost 20% of
organizations undergoing a culture change.

That same study, which involved more than 7,000
participants, also showed how critically important culture is to any
organization, and how tough it is to change it. Most efforts to change an
organization’s culture fail. In fact, only 15% succeed. But, of those that do
succeed, a significant increase in business results usually occurs.

Despite the power of an organization’s culture on impacting
financial performance, there are many leaders who still overlook or
underestimate its significance. This neglect persists despite guidance to the
contrary. Recently, the National Association of Corporate Directors (NACD)
asserted in its report, Culture as a Corporate Asset.

“In many organizations, culture does not get the level of
boardroom attention it deserves until a problem arises. We believe this must
change. Oversight of corporate culture should be among the top governance
imperatives for every board, regardless of its size or sector” (NACD, 2017).

Acquisitions unquestionably have an impact on an
organization’s culture. But too often it’s a negative impact. It’s clear from the
data that not only does more attention need to be paid to culture much earlier
in the courtship of a potential acquisition, but HR should be a strategic
partner from the outset.

Want
more information? Contact us to learn how to prevent your next acquisition from being a
cultural mismatch.