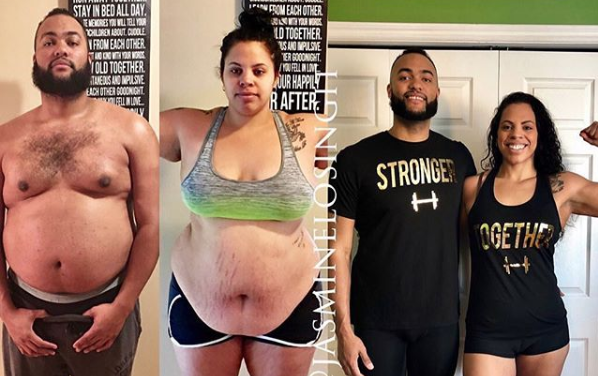 After welcoming their second daughter into the world, Jasmine Parent and her partner Jeremy Crawley made a commitment to transform their lives together.

At 300 pounds, Parent was at her heaviest and while she was filled with joy that her family was whole, she was struggling both mentally and physically.

“I looked at myself in the mirror and I was in so much pain. My knees were shot. My back hurt and I was tired,” she told TODAY. “My anxiety was so bad I didn’t want to leave the house.”

Parent spent a whole year working on getting into shape after graduating college in 2012, but after her father passed away from cancer, she turned to food to cope with her grief.

“I started to emotionally eat,” said the now 29-year-old mom. “I didn’t realize how unhappy or how anxious I was because it was just my norm.”

She gained 50 pounds while she was pregnant with her first child and soon after giving birth in 2016, Parent found out she was expecting again while still carrying the extra weight from her first pregnancy.

She knew she had to make some major lifestyle changes but had trouble finding the right motivation until she saw herself in a photo taken around Christmas in 2017.

Parent and her childhood friends have been meeting up during the holidays every year since they were 12 and each year, they document their get together with a picture.

Parent was shocked when she saw the photo that year.

She was heartbroken but finally decided to transform her pain into motivation, to get back into shape. After discussing it with her partner, Crawley, who was also overweight, they decided to make weight loss their 2018 New Year’s resolution.

Parent was determined and began researching different options when she eventually discovered the 21-Day Meal Plan, which consisted of an ‘allowed’ food list while showing them what foods should avoid. Together, they started by eliminating junk and processed foods and cutting down on sugar while incorporating fruit, vegetables, whole grains and lean meats into their diets.

Parent noticed a change right away in the first week and after a month, she was down 17 pounds and Crawley lost 20.

“I had more energy and was more focused,” she said.

“Seeing the results is so motivating and such a driver. I think, ‘What can I do next month?’” she said.

It wasn’t before the couple began exercising regularly. At 294 pounds, it was challenging for Parent at first, but with Crawley’s support, she persevered.

Their persistence paid off and led to success. By setting short-term and realistic goals, Parent lost 120 pounds and Crawley lost 95 pounds over the course of 10 months.