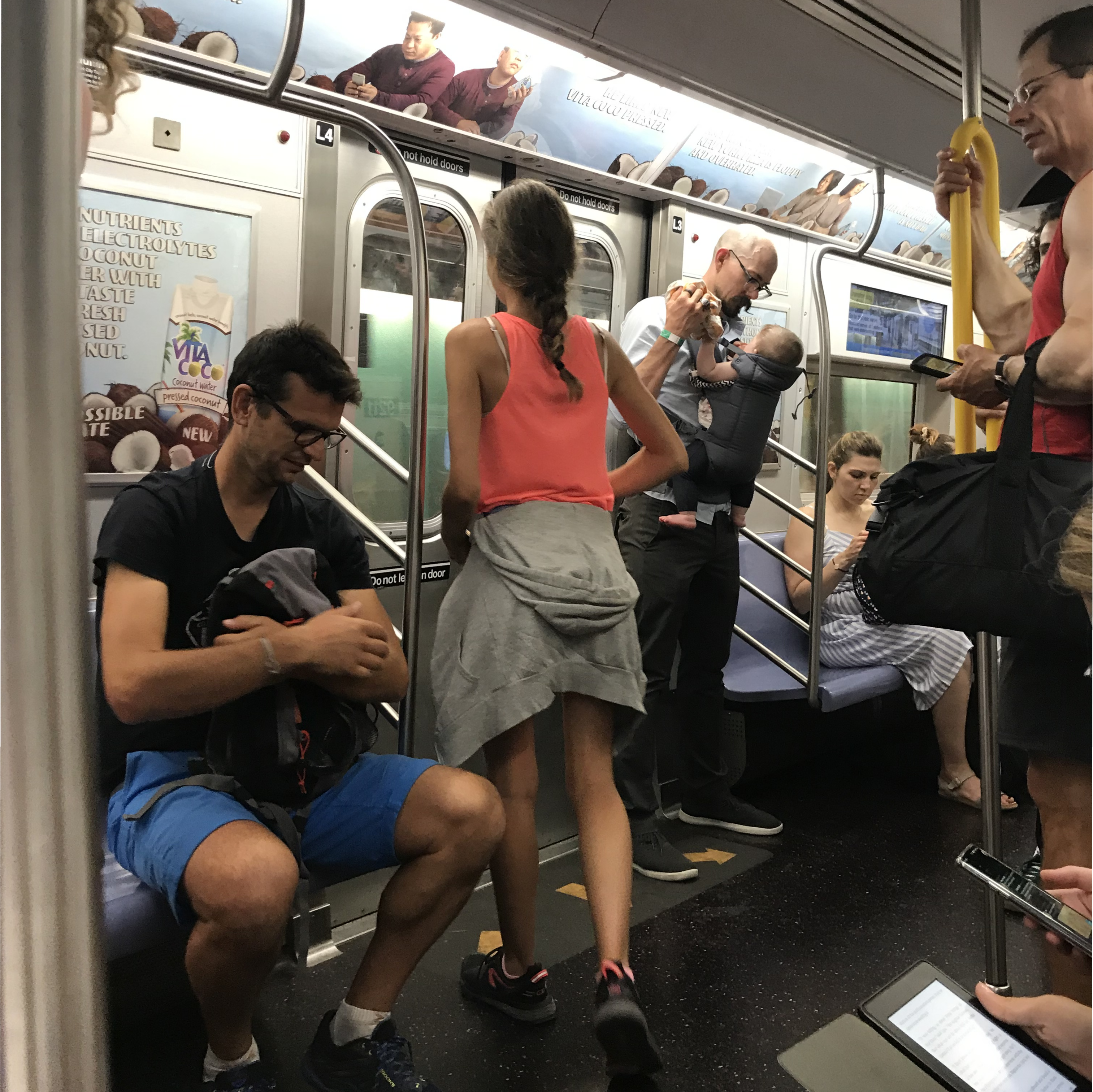 Two Sunday mornings every month I ride the NYC subway down to the southern tip of Manhattan to my volunteer job at the 9/11 Memorial and Museum.

I sat on the train this past Sunday with a heavy heart, having awoken to the news of yet another mass shooting that had taken place overnight in Ohio following the same earlier in Texas—both within 24 hours.

I had earphones in, listening to music, but as we pulled out of our stop at Times Square, I noticed a few people around me abruptly sitting up from the usual hunched-over-the-phone posture of most subway passengers. Then a few more. In the span of no more than about 15 seconds it became a ripple that ran up and down the benches on both sides of the subway car.

Everyone was looking in the same direction. I followed their gazes to a young man who had boarded the train at Times Square. He wore a bright tee-shirt emblazoned with a crude political message and an image of an assault rifle.

Before I go on, be assured that this isn’t a “What in the world was he thinking?!” screed.

This is a (very) short story about leadership and teamwork, what happened on a train filled with strangers—and how a tiny micro-community formed as we headed together from midtown to the financial district on a Sunday morning.

So, everyone sat up. People removed their earbuds. We had eye contact with one another, which isn’t something that ordinarily happens in a NYC subway car. In fact, we studiously avoid acknowledging one another or reacting to much of anything that goes on — which can include dancers swinging from poles and cartwheeling down the center aisles, singers wailing (sometimes accompanied by portable karaoke machines), buskers busking, beggars begging, and more — we keep to ourselves. But not this day.

Some men nodded to one another, acknowledging that something was happening—what it was we didn’t know, but we were all present in the moment together.

A couple of men rose from their seats. A few stood with their arms folded across their chests, looking directly at the man in the tee-shirt. A woman sitting across from me stood and walked to another bench, planting herself squarely and protectively in front of a pregnant woman.

The only sound was the screeching of the rails under us and the canned MTA announcement overhead. As we neared the next stop, an elderly passenger pointed to the young man, caught his gaze, shook her head sadly, and said one word, quietly and firmly: “No.”

The young man looked down at the floor and didn’t look up again until the next stop. He left the train at Herald Square, disappearing into the crowd on the platform, and as new passengers surged in, the moment was broken. It had lasted all of about four minutes, but it was palpable.

Of all the places I find myself moving through regularly, there are two in which I always feel the safest: airports and the World Trade Center site—both because of the visible presence of security, the latter especially so. I spend my volunteer time at the 9/11 memorial often within arm’s reach of a heavily armed member of the NYPD’s anti-terrorism unit.

But it occurred to me as I recounted Sunday’s subway experience to one of my colleagues that this four minutes on the train, which was equal parts anxiety-inducing and reassuring—that I feel safe on the subway. I feel safe in knowing that true leaders will step up anytime and anywhere to set the tone, offer empathy, and inspire others. I clearly saw all of this in action in that brief experience.

My colleagues and I know from the research we do on the nature of leadership that it affects everything:  from talent attraction and retention to innovation, agility, execution, and outperforming the competition. Leadership does not require a title. It’s about influence and connection.

Leadership is also about assessing the environment, weighing the options, and taking measured, thoughtful action in the best interest of all. Every community, every organization, has leaders hiding in plain sight. Our ongoing work in
Organizational Network Analysis helps illuminate these hidden stars in companies—the people who lead through actions every day. Sunday morning, those leaders who otherwise probably prefer to be anonymous, were clearly in view.

Of course, I’m not suggesting that the man wearing the provocative shirt was intent on doing anything other than demonstrating poor taste and judgement. But surely, he had to have known that traveling around New York City wearing that shirt on any day, but most especially within hours of two devastating mass shootings, would invite some sort of response.

I don’t think the reaction he got on the N train on Sunday—a demonstration of calm, purposeful leadership and community—was one he might have anticipated.

But here’s what I took away from those four minutes: Yes, we are living in increasingly uncertain and frightening times, we all have broken hearts in one form or another, but: