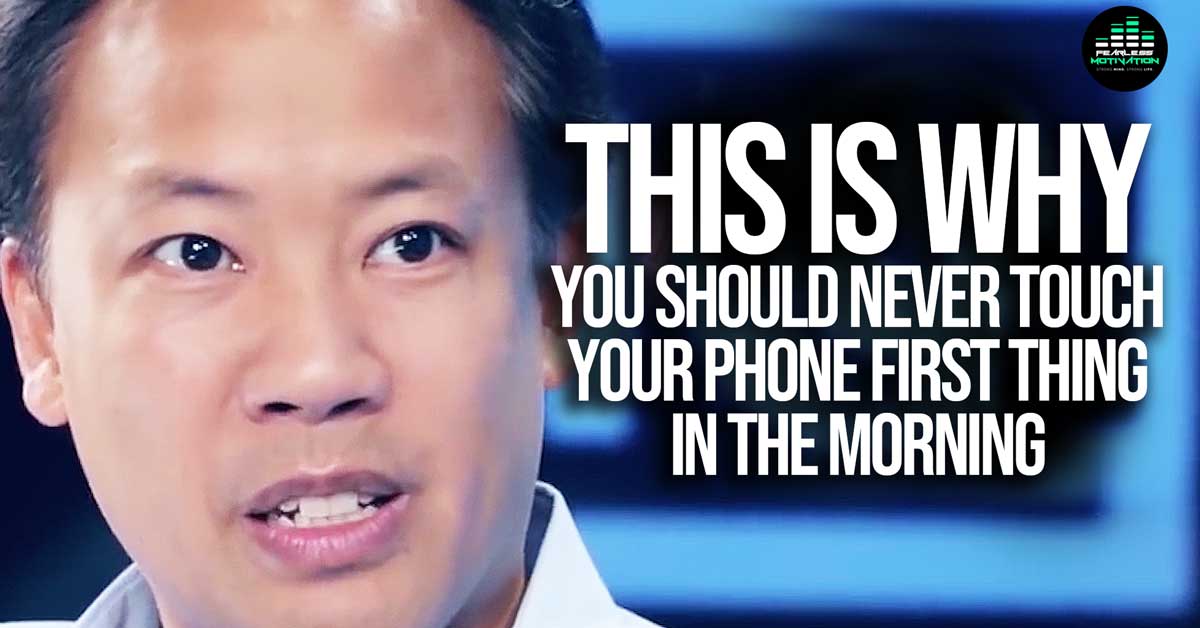 – [Jim Kwik] I think one of the things that’s really powerful, is just a lot people they give away their sovereignty and their power first thing in the morning. The first thing in the morning, they’ll just pick up their phone, and they’ll check everything, because the way it’s set up, they’re getting their dopamine fixes, and it’s really rewiring their brain. So it’s training them just to be distracted all the time.

– [Tom Bilyeu] What’s your morning routine look like? How does one avoid falling into the trap of reaching right for the cell phone and letting the world dictate?

– [Jim Kwik] Okay, so, I like really managing my first hour of the day, and the last hour of the day. Because that’s what I can control. Sometimes when I go to the office, things are gonna hit you and such like that. But here, when you wake up, instead of reaching for your phone, first of all I always keep it, I don’t keep the phone actually, I don’t touch my phone for the first hour, because the problem is, when you check, through your email for instance, all you’re training yourself is just how to respond. When reacting to everyone else’s demands that they have for you. All the requests of the things that they’re sending you. And so that’s something that I don’t wanna train my brain to do. I meditate 20 minutes in the morning, and I have a full glass of water, I plan my day, I just write down three business things that I wanted to be able to focus on, and then three personal things. And that’s a win for me. I don’t have to go through a checklist of 200 things. If I just do these three things, it’s a win for me. Even Will Smith, he says the two most important things, just run and read every day. Do something physically, and something mentally, to be able to keep yourself engaged and active to it.

There are so many distractions and there’s so many enemies that are out there. And it’s literally rewiring our brain. Even social media, the challenges with these terms like Facebook depression and everything.

– [Jim Kwik] This is social media depression because where it’s everyone’s looking at their feed, and they’re comparing their lives to other people, the highlights of other peoples lives.

And there’s actually less life satisfaction, more sadness, depression and stuff like that, because everyone’s comparing themselves to other people. And it’s a challenge, more and more time is spent there. These devices are created to literally jolt you with dopamine, give you these fixes.

And also, the other reason you want to routine your life that’s important is because, a lot of people nowadays, in addition to the overload and the overarm we all feel from the demands, is something called decision fatigue. And decision fatigue is saying, latest research is saying that you can only make a certain amount, a set amount, of good decisions a day. And then after that, you can’t. And so people like, even simply, you’ve heard that Mark Zuckerberg or Tony Shey, they wear the same clothes every single day. The same sweatshirt, the same Zappos t-shirts, and you ask them, and not the same thing, they have their whole wardrobe, 20 of them, but the reason why is because they don’t wanna waste a decision on what should I wear today when they could be working on the things they’re most excited about.

I do believe that after certain amount of focused effort, people suffer from mental fatigue, and that’s where they make more mistakes. That’s where people become shorter with their temper, that’s where the people make less than the best decisions ever, just because of fatigue and exhaustion. Because they’ve been so focused doing certain other activities and such.